‘I only go to the office once or twice a week now,’ says RC Brown founder and chair Bob Brown. ‘I sometimes do my personal finances there because the broadband is faster and I can’t work my wife’s computer,’ he deadpans.

Twenty-seven years on from the launch of the Bristol-based asset manager, Brown says he is enjoying the perks of a semi-retirement, with a minimum hands-off guidance of the firm’s operations, and clearly relishes not being obliged to earnestly discuss the dustier points of wealth industry arcana.

Originally an institutional manager, the first clients of the company were trustees and charities. A private-client arm was added almost a decade ago, at the time when Brown was beginning to take a step back from the business.
‘I have never dealt with a private client, I am not even allowed to,’ he says over lunch with Wealth Manager and his son – and RC Brown investment director – Oliver Brown, adding that he has not felt the need to keep up with the CPD which would allow him to put private client manager on his business card. This does not seem to be a state of affairs likely to lose him any sleep.

‘I was lucky. I spent most of my career focusing on investment,’ he says. ‘I don’t miss having clients – money stays where you put it, but they tend to get in the way.’ 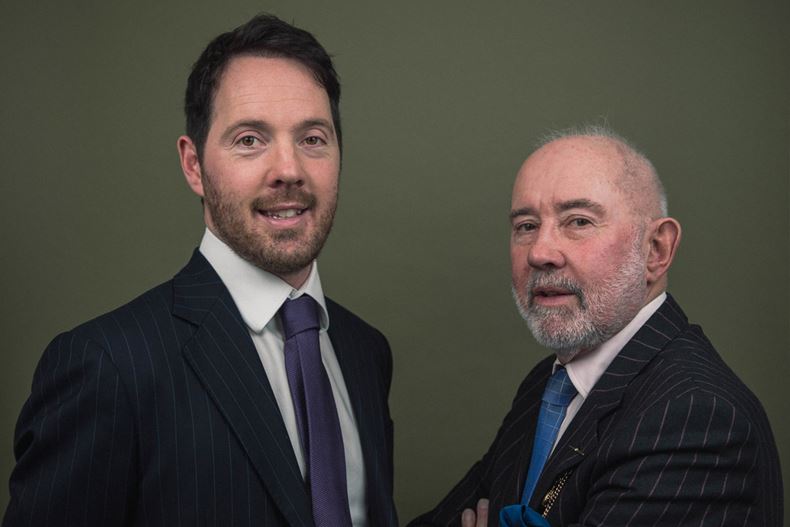 Brown senior is now chair of the board, with three more seats at the table: his son, investment director Alan Beaney and Glenn Meyers, head of managed funds.

‘I still read the financial press and I enjoy very much meeting new companies,’ he continues. ‘Some of the industries I understand and others I will never understand as things get more technical. And I enjoy chairing meetings.’

Brown began to search for a successor in 2007. Although an employee at the firm, his son at the time was still developing the depth of experience needed to put him among the contenders.

A couple of failed attempts followed. His first choice was a ‘high-class investment manager’ who he had worked alongside in the years before launching RC Brown, but whose wife was not keen on a move to Bristol.

The second effort came to an untimely and unfortunate end when the hopeful heir was dismissed from their prior role over professional misconduct issues. ‘I’m jolly old now but I was old then and wanted to find a successor,’ he says. ‘I always wanted to have private clients in the middle of the retail business and the institutions.’

Brown then ran into Alan Beaney in a box at Cheltenham. ‘I had known Alan for a long time but I bumped into him. He was working for Principal as head of investment at the time.’

He joined the firm in 2010 and the hiring of Meyer, previously director of fund research at Standard & Poors, followed shortly after, with the two handling the bulk of the day-to-day investment operations.

Brown junior had been with the firm for three years at the time, having trained with Grant Thornton as a chartered accountant, a trade he did not particularly enjoy.

A decade later he is now the firm’s second longest serving employee, and while he sits below Beaney and Meyer in the chain of command, he now handles much of the coal face investment work.

‘I am the investment manager who runs the most money in the business,’ he says. In addition to dealing with institutional investors, RC Brown’s traditional clientele, he handles the 20-year-old MFM UK Primary Opportunities fund alongside Beaney, with both Citywire AA-rated on their track record.

One of his big projects is rebuilding assets of the fund, which have dwindled in recent years, from an earlier peak of £40 million to a current figure of near £10 million. The business’ attempts to lift the profile of the UK Primary Opportunities fund have been assisted by a solid period of outperformance.

Being the firm’s only in-house product, the fund is open to retail investors but is not cross-sold into wealth management portfolios. Company assets and those of its employees are invested in the fund, however.

Bob Brown says that RC Brown did manage some high net-worth segregated accounts alongside pension funds and charities. ‘Then in 1996 some friends of mine said: “We don’t all have £1 million, you know – why don’t you set up a unit trust?” So we developed the retail business alongside the institutions.’

Under Oliver Brown’s management, the fund has moderated its aggressive conviction from 35 to 70 positions. Over the past three years it has returned 40.9% against a peer average of 28.6%, but performance over a five year stretch has been less impressive.

Oliver Brown says this is the reason why so much effort is being put into getting the word out.

‘In the last 10 years we have spent more time in servicing our clients than growing, but now we have more time for growth because there are more resources going into marketing,’ Brown senior adds.

The firm now has 10 staff and two consultants, up from six a few years ago. Assets under management stand at £260 million, nearly half of which is within the private client division.

The company manages 277 clients directly, with another 655 managed and administered.

The business took a painful blow in recent years after its largest institutional client opted to adopt an ethical mandate and pulled its contract, with a couple of staff having to be let go as a result.

One of the things which kept the company afloat was a sizeable war chest, which today stands at £1 million. Another was the ‘incubator’ service, launched in 2016 after RC Brown played host to a number of Rowan Dartington leavers under its regulatory umbrella, which helps start-ups by charging a small percentage of assets in return for a full spectrum of custody, computer systems and compliance services.

‘We always had a lot of money saved to keep the business going, so it was not as bad as it could have been,’ says Bob Brown.

They reigned themselves in and a few months later got Alpha Portfolio Management on board which helped fill the hole.

Getting more start-ups on board is among the firm’s future plans. ‘We can help them launch their own offering, as we have done with Coram, that is now an independent business, or continue to operate under us, as Alpha does,’ says Oliver Brown. He is on the lookout for teams who have become disillusioned with working at larger firms and who are looking to strike out on their own.

The company also plans to continue growing its private client business, something which he is confident will happen by £25-30 million a year organically. ‘Historically we were happy with a £10 million client, for example, but what we have mainly done is make normal people more comfortable,’ Bob Brown says.

‘We run the business for the clients, not to make money for ourselves because we assume that we will make money if the clients do well. And we are still growing.’

‘We are lucky with clients,’ Oliver Brown adds. ‘The ones I have are those we have had for a long time and some of them employ me precisely because they do not have time to deal with it themselves.

‘Now that things are good, everyone is quiet. They see their valuations and they are happy but when markets become more volatile this may change.’

The firm has a minimum investment limit of £15,000, substantially lower than most of its peers. It is a way of capturing a client who may have a promising career and a paid-off mortgage, but before they have more money to invest.

‘We genuinely like helping people,’ Bob says. ‘How much money we make of it I do not know but my colleagues say we do.’

X
This site uses cookies. Continuing to use this site means you agree to our use of cookies. Find out more.